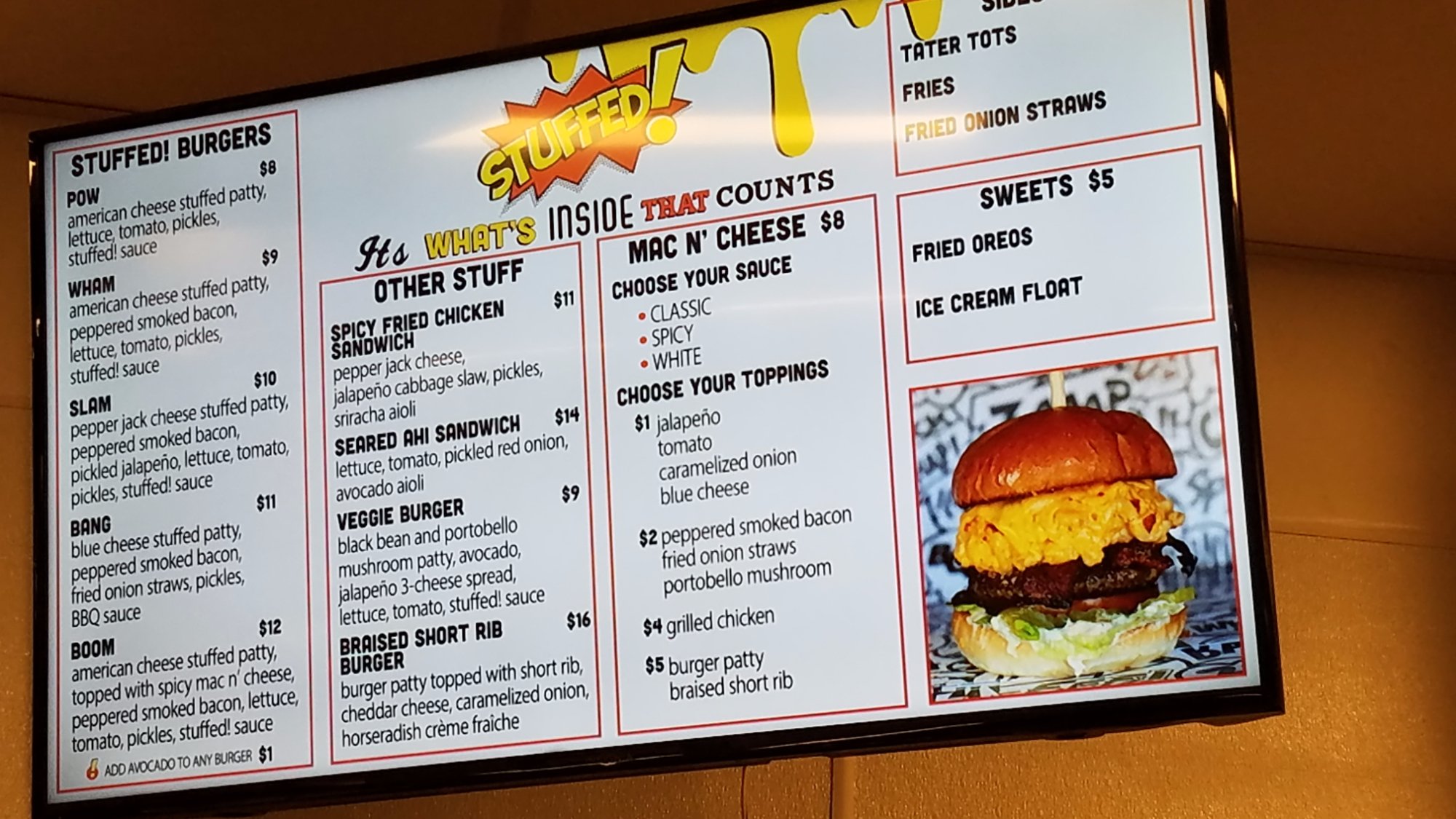 What You’ll Find At Stuffed!

Like New York and other cities in America, San Diego is home to many great burgers. However, few make an impression similar to “STUFFED!” Burger Restaurant. No matter what kind of burger you prefer, STUFFED!’s got you covered. STUFFED! Burger Restaurant operates under the slogan” it’s what inside that counts” and is well known as the go-to place at liberty public market for flavor-packed burgers. Customers often describe the burgers at STUFFED! as having the effect of “making one hungry just by thinking about them” and as having “great value per dollar”. Customers who have experienced the service at STUFFED! generally describe the staff as friendly.

STUFFED! Burger Restaurant is located in liberty public market at 2820 Historic Decatur Rd, San Diego, CA. It opens from 11 am-8:30 pm from Monday to Thursday, from 11 am-9:30 pm on Friday, from 10 am-9:30 pm on Saturday and 10 am-8:30 pm on Sunday. Currently, the restaurant only offers takeaways and deliveries but does not provide dine-ins.

Brief History of the Burger

The burger traces back to as early as the 4th century. It has survived many wars, economic crises, and more than a dozen centuries. Burgers were a European cuisine for a long time and were brought to America by Germans fleeing political revolution from their home. After creating a unique bun for the hamburger in 1916, Edgar Ingram and Walter Anderson started White Castle, the world’s premier burger chain, in Kansas in 1921. The first-ever burger ‘with cheese’ appeared on a menu at O’Dell’s Diner in LA in 1928. In 1935, Denver’s Humpty Dumpty hotel coined the term ‘cheeseburger’.

Burgers are nearly always the most exceptional value on a menu, fillingness-wise, and calorie-wise, which makes little sense from an economic standpoint. With the soaring beef prices today, the ingredients in a half-pound, house-ground burger are considerably more costly than some tomatoes, a few ounces of penne, and a garlic clove. Despite this, the pasta dish is always more, for entirely sociological reasons. Naturally, people expect a burger to be affordable. The fact that a burger is a sandwich marks a distinction in the category that groups it with working lunches and food you eat using your hands. Burgers reverse the civilized manner of western society, by doing away with forks and other implements used to minimize contact between food and the body. The bun, the American addition to the German Hamburg-er, takes us back to the prehistory of the plate when food used to be served on bread that one ripped pieces off at will.

Descriptions of burger eating very frequently concentrate on the need for a good burger’s juices to drip down a person’s chin and fingers: part of a burger’s fundamental purpose is the cancellation of the European taboo against dirtying one’s hands with food. In this to eat a burger is to undertake a populist desire to part ways with gastronomy entirely, with the idea of an elaborated cuisine. For this reason, the burger is a staple that doesn’t wax and wane, that Americans can eat anywhere and everywhere, and that’s perpetually a great deal.

When it comes to burgers, almost every person has an opinion of what constitutes an excellent burger. Some people prefer a thick, juicy patty one while others prefer to go with the smashed patty with crispy edges. As for buns, people still debate about the superiority between an egg, brioche, or sesame-topped bun. Another question that arises when talking about burgers is whether fancy restaurants make better burgers than their less expensive counterparts.